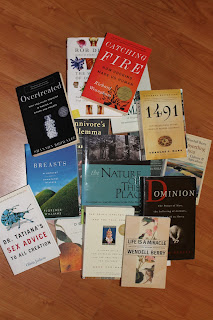 A couple people have asked me for a list of recommendations from the stacks of books that I've read in writing my own (now to be titled All Natural). The list below is not complete (my full source list is over 9000 words) and are in no particular order. These are just the books (and other forms of media) I found particularly entertaining and interesting. Nothing here that you *should* read if you can get around to it in here, and (with great difficulty) I've restrained myself from listing all the books that would make me look smart and might impress you. No, this is just the stuff that was a pure joy for me to consume.

On our place in the world:
In Full House Stephen Jay Gould makes the case that microbes rule the world (there's an essay adapted from that here), while Michael Pollan plays with the idea that plants are using us rather than vice versa in Botany of Desire. Neither is meant as an absolutist argument that we are zombies being driven around by plants/microbes, they just serve to delightfully dislocate human-centric perspective and humble. Robert Sapolsky provides a similar service by comparing people to our primate kin in this talk, and Olivia Judson amuses by comparing human sex troubles to those of "all creation" under the persona of Dr. Tatiana. Then there's Rob Dunn who looks at the way our neighbors, allies, and attackers of other species are shaping the human body in The Wild Life of Our Bodies.
Given that we are so inextricably enmeshed in our environment it may be rash to meddle too much, and exert our puny human hubris. Two fascinating books make the case that humanity went bad with the agricultural revolution. Daniel Quinn's Ishmael is a classic (though simplistic in precisely the right way to appeal to me when I was in high school) that presents history and morality from the perspective of a gorilla, and Richard Manning's Against the Grain makes many of the same points in a more sophisticated way. Both are tremendous fun and deserve to be considered seriously. On the other side You have Wendell Berry lyrically arguing that culture and agriculture are mutually dependent in The Unsettling of America, and Pollan (again) in Second Nature picking up where Berry leaves off (with less thunder and more humor). Charles Mann's 1491 is worth reading even if you think you have no interest in this stuff, and he adroitly breaks down the image of the noble hunter-gatherer in pre-Columbian America, replacing it with far more fascinating advanced cultures that managed their environment with agriculture and fire. How do we put all of this into practice today? Rebecca Reider follows a group of people who tried to reengineer Eden in Dreaming the Biosphere. It's absolutely the best book I've read about this fascinating experiment and it's a little stunning to me that it isn't more widely read. The Biosphere 2 experiment captured so many imaginations and now whenever I mention it people ask me, "Whatever happened with that?" I say, "Read this book!" And then there's one more book, The Nature of This Place, about people trying to find their place in the environment in a much more humble way, by tinkering and learning what little bits and pieces they can in the Yuba River watershed, where I grew up.

So much for the health of the earth, what about personal health? Obviously doing things naturally, or defying nature has implications there too.
On birth:
Jennifer Block's book, Pushed, on the state of childbirth in the United States is carefully referenced and skillfully written it's an excellent read. Also fascinating is Atul Gawande's article "The Score" (included in Better), though I've quibbled in print with one of his conclusions.
On vaccines:

I ended up writing about this at some length here.

On natural and technological medicine:
Let's start with the assertion, in the subtitle of Shannon Brownlee's excellent Overtreated, that "too much medicine is making us sicker and poorer." Everyone who votes should have to read that book, and it would be no burden - it's a quick, illuminating read. Several great radio pieces helped convince me that Brownlee had gotten it right on balance. But I think there's also something else going on: We don't just get unnecessary medicine because we are dupes, we seek it out because there's a vital part of our health that cries out for attention, but that our medical system tends to ignore. Though I didn't reference it directly, Anne Fadiman's The Spirit Catches You and You Fall Down does a better job than anything else I've read at teasing out the need for medicine to work on a cultural, perhaps spiritual, level in order to do more good than harm. And, where Fadiman's worked by looking outward at another culture, Chip Brown tackles (what I see as) the same problem by looking inward in Afterwards, You’re a Genius. The results are, predictably more idiosyncratic which makes things more muddled and sometimes frustratingly difficult to pin down (I got fed up with all the vagaries of the spiritual healing types he was hanging out with) but this is counterbalanced  with self-lacerating honesty and humor. More directly on environmental health, Florence William's Breasts is the most entertaining introduction to chemical endocrine disruptors you'll see.

On what to eat:
If you really want to understand the evidence on what our ancestors ate as they evolved into us, Catching Fire, by Richard Wrangham, is the book for you. Of course Pollan (again) does a great job of pointing out that there is no simple answer (as in, "just eat naturally!" or "just eat nutraceutically!" though he leans hard toward the former) in In Defense of Food. And the Pollan (yes, yet again) also makes the case that the heath of our food is inseparable from the health of our food system, out economy - in short - our environment in The Omnivore’s Dilemma. He's following in the footsteps of my former dean Orville Schell, whose Modern Meat stands the test of time and still feels modern many years later. And if you like that you should definitely read another one of it's progeny: the meat-thriller novel My Year of Meats by Ruth Ozeki. Once you've accepted that the health of the food system is important you need to take into consideration the health of agricultural towns and the conditions in which animals are grown for slaughter. On the latter, the most interesting book I've come across is Dominion, by the former Bush speechwriter Matthew Scully, who makes the case for animal rights on the grounds of Christian morality. On the former, Nick Reding's Methland is like watching Breaking Bad, only it's real, and in Iowa.

And one more:
This book doesn't fit with the others - it's not a fun easy read. It's difficult, and it's about 600 pages long. But I think it's an important book and tremendously exciting intellectually. I'm talking about Iain McGilchrist's The Master and His Emissary. I suggest reading until you get stuck then skipping to the second half - enjoy the whirlwind tour through history - and then come back the the first half once you understand what he's driving at and why it's worth it.

That should keep you busy - I'll add my suggestions on vaccines soon.
Posted by Unknown at 9:51 PM

The Heidi Hypothesis refers to the wonderful book by Johanna Spyri in which children afflicted with the maladies of modernity (depression, waifishness, sleepwalking) are cured by a summer spent running through the meadows of the Alps, drinking raw goat's milk, and sleeping under the stars. One child comes in a wheelchair and leaves on foot. I find the hypothesis that nature can cure tremendously appealing. But nature is also red of tooth and claw. In this blog I'm looking to tease apart the complicated tangle of feelings and assumptions surrounding nature, technology and control. Much more at www.NathanaelJohnson.org

The background is a shot of the Yuba River, where I've spent many hours swimming and kayaking. Photograph by st_photos via flickr.